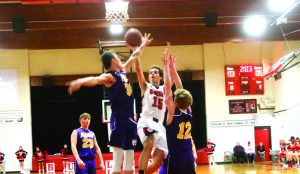 Junior Cameron Hurst (15) elevates and shoots over Riverside’s Erick Manns-Turner (30) and Wesley Voth (12) for two of his game-high 23 points in Burgin’s 51-28 victory over the Rams on Friday, Feb. 16. (Photo by Arpan Dixit)

Despite the Burgin Bulldogs (9-16) basketball team not having any seniors, that didn’t stop some of their players from playing like it on senior night, in their 51-28 blowout victory over the Riverside Christian Rams (2-24) on Friday, Feb. 16.

Junior Cameron Hurst leads the Bulldogs in scoring  and rebounding, averaging 15 points and 10 rebounds per game. He scored a game-high 23 points and hauled in eight rebounds in the final home game of the season before Burgin’s district tournament showdown with the Mercer County Titans on Tuesday, Feb. 20.

“He had been struggling a little bit, so it was good to see him break out in the win tonight,” he said. “I’ve heard all these experts say you have to see the ball go through the net to get your confidence going again, and I think that’s what happened to Cameron (Hurst) tonight.”

There was a time in the first half where Riverside started playing zone, and Hurst elevated for a three-pointer and got going from there.

The Bulldogs had a 23-14 lead at the half, but really blew it open in the third quarter with their defense, forcing turnovers and connecting on easy baskets off those turnovers.

“We’ve needed to play this type of defense all the time. I thought we were a little sluggish to begin the game tonight,” Irvine said.

The Bulldogs only scored nine points in the first quarter before getting going in the final two quarters.

“Our aggression kept picking up as the game went on. Most teams have to generate offense through their defense and that’s what got us going,” he said.

Erick Manns-Turner led the Rams in scoring with 15 points.  He was the only Riverside Christian player in double-figures.