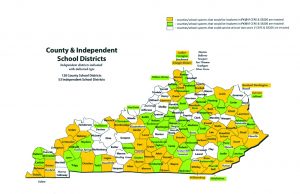 Proposed budget cuts at the state level will force local schools to make some hard decisions over the next several years.

It might even force some school districts to insolvency. There are currently 173 school districts in Kentucky. If the budget cuts go into effect, 120 of them—including Mercer County—would become financially insolvent within two years, according to figures provided by school officials.

“Huge sections of the state are going to be left insolvent,” said Mercer County School Superintendent Dennis Davis. “Once a school is insolvent, you close the doors.”

The proposed budget includes a half million dollar cut in funding for transportation and the total elimination of funding for the Mercer Day Treatment program as well as for text books and teachers’ professional development.

On top of that, expenses—contributions the District makes toward the County Employee Retirement System and state mandated increases for employees’ salaries—would go up.

yellow = counties/school systems that would be insolvent in FY19 if CERS & SB200 are enacted.

green = counties/school systems that would be insolvent in FY20 if CERS & SB200 are enacted.

white = counties/school systems that could survive at least two years if CERS & SB200 are enacted.