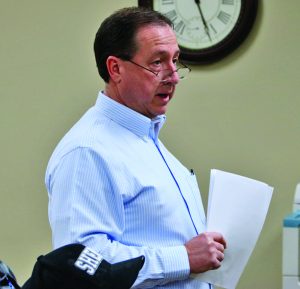 David Best has been Mercer PVA for 12 years and this is the most challenging state budget cycle he’s ever seen. He encourages Mercer residents to make their voices heard in Frankfort. (Photo by Robert Moore)

Mercer County Property Valuation Administrator David Best is trying to get the word out about the impact state budget cuts could have locally.

Best said there are currently three deputy PVAs working at his office. If the cuts go through, he’d have to lay off one of them. He would also lose a half-time position that is currently unfilled because he can’t afford to fill it.

Best and his staff process over 3,000 properties and 30,000 vehicles every year. For every dollar his office spends, they return $62 to state and local governments, he said.