A Family Hopes To Identify Vandals Who Destroyed Home

“I’m just aggravated,” said Alice Brown, “they were so mean.”

Brown is talking about the person or persons who destroyed the trailer she owns located at 980 Harvey Pike.

Sometime over the last month, someone went into the trailer and broke every single window, knocked down every single door and smashed huge holes in every wall, some so deep they went clean through, said Dep. David Prather of the Mercer County Sheriff’s Office.

The vandals smashed appliances, furniture and family keepsakes. And what they did not destroy, they marked up with spray paint.

“They were there for a while,” said Prather, who’s handling the investigation. “The trailer is far enough off the road where no one would have known they were there.”

The trailer was fine on Jan. 18, when Brown’s son checked on it. It once belonged to her mother, but has been used by her family for years, said Brown, who is from Mercer County but currently lives in Lawrenceburg. Her nephew and his wife lived in it until last year, when they had saved enough money to buy a house of their own.

And then this happened.

“Anything in there, they broke,” Brown said. “It’s just wrong.”

Prather said there are no leads. The only hope they have of catching the vandals is for someone to say something.

To learn more, check out this week’s edition of 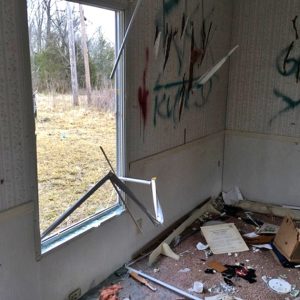 Investigators believe the vandalism of the trailer located at 980 Harvey Pike happened some time after Jan. 18. There are no leads. 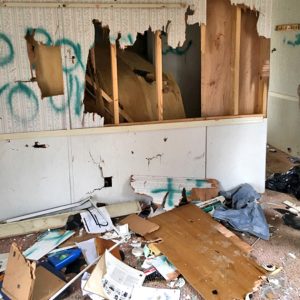 Vandals smashed through walls in a trailer belonging to Alice Brown’s family. Police are asking anyone who knows anything to contact them