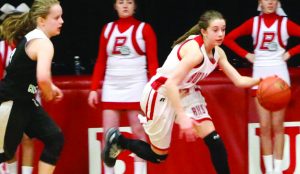 Grace Cocanaugher steals the balls and heads up court during Burgin’s loss to Portland Christian on Friday, Feb. 9. (Photo by Arpan Dixit)

Despite the homecoming festivities at Burgin High School on Friday, Feb. 9, the Portland Christian Lady Eagles (6-14) defeated the Burgin Lady Bulldogs by a final score of 53-37 on Friday, Feb. 9.

Burgin had a two point lead after one quarter of play but it was all downhill from there.

Portland Christian started their full-court press which caused a lot of problems for Burgin. It got to the point where the Lady Bulldogs turned it over on five straight possessions to help the Lady Eagles build a lead they would not relinquish.

Burgin trailed 24-14 at halftime, and the second half proved to be much of the same.

The full-court press was a huge factor in the second half, like in the first.

Senior Miranda Hungate and freshman Hannah Stewart led the Lady Bulldogs with seven points each. Hungate also added five rebounds and Stewart had a game-high four steals. Stewart has played some good ball as of late and she is just a freshman. The future is very bright for the young guard. Sophomore Julia Holton scored four points and tallied six rebounds, a team-high.

Eighth grader Ellie Jenkins, who Head Coach Chad Terrell has said is the heart of the team, scored six points for Burgin.

Jenkins classmate, Brynn Simpson, had one of her best games of the season against the Lady Eagles. She scored six points and hauled in four rebounds.

The Lady Bulldogs will be back on the court this Friday, Feb. 15, when they host Riverside Christian for senior night. Tip off is set for 6 p.m.

This will be the Lady Bulldogs final home game before the district tournament. They have the challenge of facing the number one seed in the 46th district, the Mercer County Lady Titans, who are the defending district, region and state champions. They will tip-off the first round of district on Monday, at West Jessamine High School.

Coach Terrell was not available for comment after the game.