The state has canceled a contract with the Mercer County School District cutting funding for Mercer County’s Day Treatment Program.

The Department of Juvenile Justice had been providing about a third of the funding for Day Treatment, which serves students age 12 through 18 “who have demonstrated an inability to function in a public school setting due to behavioral or academic difficulties.”

The state’s contribution amounted to approximately $24,000.

Davis said the District will make it up by dipping into the contingency fund to complete the school year.

Most students have been referred by the court system. Because of the program’s small size, they receive individualized attention they wouldn’t get in a regular classroom.

Some of the students return to high school, some enroll at other high schools and some enroll at Mercer Central, an alternative high school housed—along with the day treatment program and in-school suspension—at the Harlow Education Center on Perryville Street.

In 2016, Mercer Day Treatment received a perfect score in a state audit.

Teacher David M. Sullivan was named teacher of the year  by the Kentucky Educational Collaborative For State Agency Children the same year.

Davis said the state contract will be terminated Wednesday, Feb. 28.

However teachers’ contracts would be honored for the rest of the school year.

While the District is committed to keeping Day Treatment open this year, Davis said they could not make any promises for next year.

“With the current budget, everything is in question,” Davis said.

To learn more, check out the latest issue of the Harrodsburg Herald. 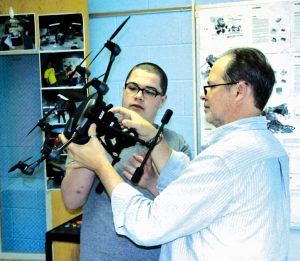