This year is shaping up to be one of the most contentious non-presidential election years in American history, with thousands of people across the country as well as here in Kentucky, many of them political novices from either side of the aisle, challenging incumbents.

In the last election, Republican Brett Guthrie of Bowling Green, who has represented the 2nd congressional district, which includes Mercer County, in the U.S. House of Representatives since 2008, ran unopposed.

This year, four Democrats are vying to challenge  him: Rane Sessions of Webster, Brian Pedigo of Glasgow, Grant Short of Owensboro and Hank Linderman of Leitchfield.

According to the Secretary of State’s office, more than a thousand candidates filed for local offices across Kentucky’s 120 counties. More than 200 candidates—half of them women and around 40 of them teachers—are challenging incumbents in the General Assembly.

Here in Mercer County, long seated incumbents are also being challenged. Sheriff Ernie Kelty, a Democrat who has held office since 2010, is being challenged by Republican Kevin D. Bugg.

County Clerk Chris Horn, a Democrat who has held office for over 11 years, is being challenged by Republican Rodney Compton.

David L. Best, a Democrat who has served as property valuation administrator since 2006, is being challenged by Republican Jessica Elliott.

The two county offices  seeing the most competition are county jailer and magistrate of district four, which includes Burgin.

Jailer Bret “Chambo” Chamberlain, a Republican, is not only being challenged by Democrat William Moore, but also by Republican Garland Christopher.

Magistrate Donald Webb, a Democrat, is being challenged by Republican George Jones and Democrat Mary Margaret Heaton, who are both Burgin residents.

No one filed for  surveyor or for district 5 constable. No one has filed yet for districts 2 and 3 of the Mercer County Board of Education. The deadline for entering that race is Aug. 14 at 4 p.m.

In Burgin, no one has yet filed for the mayoral, city council or school board races. Burgin candidates, who do not have to run in a primary, do not have to file until April.

Independent, political group, or political organization candidates for offices that require a statement of candidacy must file by 4 p.m.  on April 2, 2018.

The primary will be held May 22. The general election is Nov. 6. 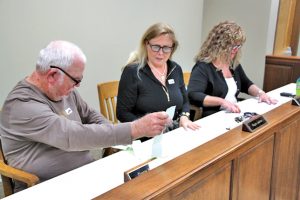 In this file photo, Virgil Monroe, Donna Holiday and Beth Jenkins of the Mercer County Board of Elections tally the vote in the 2016 election.