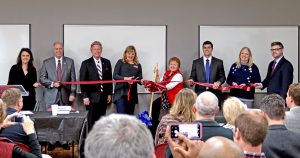 Campbellsville University’s Conover Education Center dedicated their second building at a grand opening ceremony on Wednesday, but that wasn’t the only announcement.

University officials officially opened the second building, which is named O’Dell Hall in memory of Delmer and Louise O’Dell.

The university also held a ceremonial groundbreaking for a third building.

The proposed 17,000-square-foot facility will host a cosmetology salon, classrooms, a sandwich and coffee shop and a 250 seat chapel.

Campbellsville President Michael V. Carter said the board of trustees had voted on Tuesday to make a $5 mllion investment into Mercer County over the next several years. The university is looking into adding several professional programs that Carter said would draw students from all over Central Kentucky. He said the Harrodsburg campus would need additional housing. He said the university would also like to build a gymnasium.

“None of this would be possible without each of you here,” said Wes Carter, director of university outreach.

Carter presented Freddie Hilpp, the contractor who built the extension, with a basketball for his support for Campbellsville’s new basketball team. The ball was autographed by the players on the University’s club basketball team.