In the past few months, Kentucky’s ongoing pension crisis has cost the City of Harrodsburg their fire chief and police chief, who both retired to lock in their benefits ahead of any move made by the state government.

With budget cuts and an underfunded pension plan, it’s a challenging time to lead any department, yet Harrodsburg’s interim chiefs, Scott Hammons and Brian Allen, say they’re ready for the challenge.

Scott Hammons is the interim chief of the Harrodsburg Fire Department. Hammons has been with the department since 1999.

“I was here working a full-time schedule as a part-time firefighter,” Hammons said.

Unlike most firefighters, eating smoke wasn’t a tradition in Hammons’ family.

At age 18, he began volunteering with the Burgin Fire Department, while studying mechanical and architectural drafting in Lexington. A friend talked him into it, but Hammons said he was pretty uncertain about it until he answered his first call, a structural fire not three houses down from where he’d grown up.

“I realized how much I loved it,” Hammons said.

Even though he will qualify for retirement this June, he said he does not intend to retire.

“If I was in the same situation Billy Whitenack or Ric Maxfield were in, I’d probably be looking into it,” Hammons said, referring to the city’s recently retired police and fire chiefs. “But I still enjoy it.”

Hammons hopes to be made chief permanently. He said there’s a lot of things Maxfield started he would like to see through, including purchasing replacements for some of the department’s aging equipment.

He’d also like to expand the role volunteer firefighters play in the department. Partly it’s because of his time as a volunteer. As district chief of the all-volunteer Shakertown Fire Department, Hammons has watched the company grow to 22 members.

At Harrodsburg, Hammons would like to bring back the once a month drill nights.

“That’s exciting to see,” Hammons said. “It brings excitement and keeps excitement in the department.”

But it’s also a pragmatic decision. With the possible cuts in state retirement benefits, Hammons said the department may have to rely on volunteers more than they have in the recent past.

Currently the department is short four firefighters. Hammons intends to ask the city commission to make an emergency hire.

“Depending on what the state does, we may have to rely on part-time and volunteers until we can get the manpower,” Hammons said.

Brian Allen is the interim police chief. He has been a police officer for 17 years and has served with the Harrodsburg Police Department for 13 years.

Originally from Salyersville, Allen said he  moved to Mercer County courtesy of his wife of 21 years, Wendi Allen.

“I met my wife in Lexington. She was from here,” Allen recalled. “She and I started dating and the next thing you know, I’m in Harrodsburg.”

From the day he was sworn in, Allen knew he wanted to be a detective. He said he always wanted to know what happened.

“That part always fascinated me,” he said, “but there’s nothing better than telling a victim that we’ve solved their problem.”

Allen could have retired in August, but didn’t. “I’m still young. I still love what I do. I love these guys and I love this place,” he said.

But that’s only part of why he stayed. Allen is full of praise for the improvements made by Whitenack, especially getting the department accredited, which will lead to a 10-percent reduction in the city’s insurance premiums.

“Chief Whitenack pointed us in the right direction here six years ago,” Allen said. “I think we’re on the right track and I want to maintain it.”

Like Hammons, Allen said he would like to become the permanent chief. Among the goals Allen discussed was creating a new rank structure  that would reward officers who enjoy “chasing taillights” but who don’t want to be supervisors.

He said he’d also love to bring back the hazardous duty retirement benefits, but that may prove difficult.

The pension crisis has led to city governments across the commonwealth to do away with hazardous duty plans.

“I think that would help with both retention and recruiting,” Allen said. 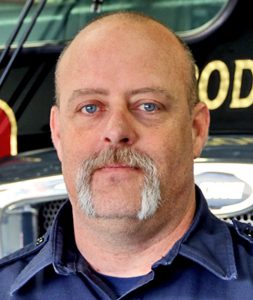 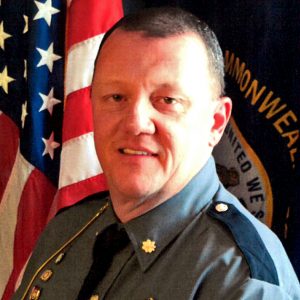