Harrodsburg officials are asking people to make sure they know where their final resting spot is.

The problem, said Rosalyn Drury, the sexton at Spring Hill Cemetery, is family-owned lots. Many of these estate lots were purchased long ago and descend like any other heirloom from one heir to another. Over the generations, the lines of ownership become tangled like roots with the end result being that a family finds they have nowhere to bury their loved one.

“There are a lot of heirs,” Drury said. “Some of the estate lots date back to the 19th century.”

She said city ordinances require the signatures of all heirs before burial, but it hasn’t been enforced until recently.

Not long ago, the cemetery interred a person in an estate lot with the permission of a family member. After the burial, other heirs came forward and disputed the burial.

“The cemetery did have the appropriate documentation from one of the heirs, but it takes all of the heirs to approve a burial that does not belong to the person,” Drury said. “I’m in a little bit of a bind here.”

Most people don’t include cemetery lots in their wills—if they even have a will. But legally speaking, a family plot is real property, just like a house. If the original purchaser does not designate an heir for that lot, it gets passed down with the rest of their property. Kim McGrath, senior clerk with the City of Harrodsburg, said one estate lot ended up being inherited by a college.

“It’s considered real property in their will and it goes to the heirs,” McGrath said. “If there isn’t a will, you have to find all the heirs, and that can be difficult.”

Further complicating the issue is that family lots are often promised verbally by one relative to another. However, those promises have no legal standing.

“We need to have the documentation,” McGrath said.

The death of a loved one can be overwhelming. Western custom dictates the deceased must be interred within three days of death. That does not leave a lot of time to  round up signatures and get a permission form notarized.

And that depends on everyone in the family agreeing. That’s not always the case, McGrath said. When relatives disagree over who gets a grave, the city cannot proceed until there is a resolution or a court order is issued.

In the gravest disputes, the deceased’s remains could be exhumed and reinterred elsewhere.

The best way to avoid that kind of nightmare, McGrath said, is to do the one thing most Americans hate to do: plan ahead.

“Don’t procrastinate,” she said. “The 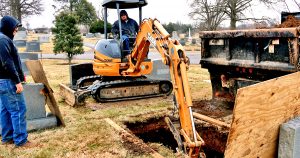 Tyler West and Austin Vaughn, employees at the Spring Hill Cemetery, dig a grave. City officials are being forced to more strictly enforce ordinances about family plots after a recent dispute.

longer you wait, the more likely it is that heirs have passed on, making it even more complicated.”

Estate planning is key. Including a family lot in your will, designating who gets to use the lot and who doesn’t, makes it easier when the time comes.

“If there’s a question, it’s best to get things started,” McGrath said.

If your grave is not in your name, the other heirs will need to sign a permission form, which also needs to be notarized and presented to cemetery staff before burial.

“Being proactive with this eliminates hardship at the time of interment,” Drury said.