Motorists and truckers should be prepared for more headaches getting into and out of Mercer County.

The state has dropped the weight limit on Kennedy Mill Bridge, which carries Kentucky Route 152 across Herrington Lake, from 10 to three tons after an inspection last week.

Because of the lack of a detour, Lacy said the current bridge will be maintained until its replacement is complete. The estimated completion date is Nov. 29, 2019. 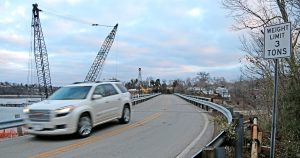 The weight limit on Kennedy Bridge was dropped from 10 tons to three tons after an inspection conducted last week revealed further deterioration of the gusset plates which hold the 94-year-old bridge together.

Meanwhile, the Brooklyn Bridge, which carries U.S. 68 across the Kentucky River, will be down to one lane. There will be alternating lane closures Mondays through Fridays from 8 a.m. until 5 p.m. At least one lane will remain open while state crews install additional safety signs as part of the Highway Safety Improvement Program. No work is planned for Saturday or Sunday at this time.

All work is subject to change depending on weather, emergencies and other factors beyond the control of the Department of Highways.