Officials are still investigating a collision between a train and a tractor-trailer that left Harrodsburg streets closed for hours Sunday night.

At 7:30 p.m. a semi from Oklahoma carrying perishable items crossed the railroad tracks at the intersection of North College and Factory Streets, where it was flipped over by an oncoming train, according to the Harrodsburg Police Department.

The collision caused a fuel leak which required assistance from Disaster Emergency Services.

While the train had cleared the tracks by 9:51 p.m., clean up efforts on North College Street continued until 1:06 a.m. while Factory Street remained closed for another hour, police say.

No injuries were reported.

The tractor-trailer was severely damaged and was towed by Carey’s Wrecker Service in Lawrenceburg.

At press time, police were unable to provide the driver’s identity or any details about the owner of the truck. 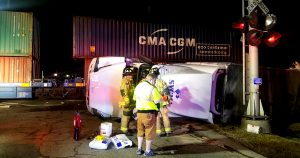 No one was reported injured after a tractor-trailer was struck by a train at the College and Factory Street intersection Sunday night.