Mercer County has joined Boyle, Garrard, and Lincoln Counties in being accredited as “safe communities.”

Last Thursday, local leaders, including the judge-executives of all four counties and the mayors of the four biggest cities, assembled at the Boyle County Public Library to sign the agreement formally recognizing the Safe Communities Coalition of Central Kentucky, of which Mercer is a part.

The four counties received their accreditation with the Safe Communities of America program. Kentucky has 31 accredited safe communities, the most of any state in the nation.

Safe Communities of America is a collaboration  between the National Safety Council, the Kentucky Injury Prevention and Research Center and the University of Kentucky College of Public Health. Their goal is to create safer communities throughout Kentucky by reducing injuries and fatalities.

The four counties will share information and work to reduce redundancies.

“This is big,” said Kathy Crown-Weber, executive director of the Mercer County Health Department. Crown-Weber was the task force leader for Mercer.

“A whole lot of folks were involved,” Crown-Weber said. “We just started talking about what programs existed when it came to safety and what is missing.”

The Heart of Kentucky United Way, which is headquartered in Danville, led the effort to get all four  counties accredited together.

“We are great as counties, but we are truly incredible as a community,” said Dr. Stephanie Blevins, executive director of the Heart of Kentucky United Way. “This is not the end, it’s just the beginning. We challenge each of our safe community task forces to treat this as a beginning—continue to look for ways we can make our communities safer for the people that live and work here.”

Being an accredited Safe Community comes with benefits. The communities can  use their accreditations to apply for grants.

Crown-Weber said the next agenda for Mercer’s task force is applying for $1,000 grants for the county’s two high schools to deal with the issue of teen driving. She said Mercer is the only partner county to qualify for the grants.

To learn more, check out the latest edition of the Harrodsburg Herald. 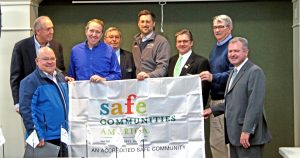 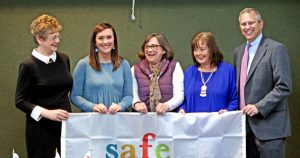