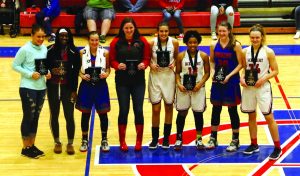 In a rematch of their previous match up in early December, which the Lady Titans won by two points, Sacred Heart got their revenge this time around.

The Valkyries (17-5) got the best of the Mercer County Lady Titans (22-2), defeating them by a final score of 83-48 in the championship game of the prestigious Louisville Invitational Tournament (LIT) on Saturday, Jan. 27, at the Christian Academy of Louisville. No, that is not a typo. The Valkyries shot a scorching 58-percent from the field, compared to 30-percent for the Lady Titans. According to the Louisville Courier-Journal, this was the biggest championship-game blowout in the history of the LIT.

In their previous match up on Dec. 2, Sacred Heart travelled to Harrodsburg and had a 15-point edge on the defending state champs, but squandered the lead and lost by two points. This time was much different.

Both teams were playing their third game in 24 hours,  but Sacred Heart was ready to play from the get-go. They had a 27-13 lead after one quarter of play, and didn’t allow the Lady Titans to come within 10 points the rest of the game.

Sacred Heart also won the rebounding battle, 34-28, and also scored 25 points off 18 Mercer County turnovers. The Valkyries also had 42 points in the paint, compared to 18 for the Lady Titans.

“Kudos to Sacred Heart. They played fantastic and we pretty much had an empty tank,” said Head Coach Chris Souder. “We have an entire week to recharge our batteries and focus on the stretch run. We will get back to some basics this week and redefine some roles and make sure everyone is on the same page.”

Souder said he has no worries moving forward because he knows these girls are capable of making another run in March.