After three technical fouls and an intentional foul, the Mercer-Boyle rivalry was as intense as it’s ever been. The Titans (15-4) were able to defeat Boyle County (10-3) by a final score of 70-62 in a hard-fought rivalry game.

The Mercer student section made their presence well known and Head Coach Josh Hamlin talked about the atmosphere coaching in a rivalry game like this.

“Hats off to our students. It is unbelievable having their support,” he said. “During time outs, it was completely quiet. They were listening to every word that was said and I’m pretty sure they could have called the plays so it was great having them there.”

Mercer started off the game with three pointers by seniors Trevon Faulkner and Ty Divine. Faulkner had a game-high 31 points and more importantly, was 10-10 from the free throw line, knocking them down when they mattered the most.

Divine was just as good and clutch. He had 18 points and went 6-8 from the charity stripe.

Mercer led 34-22 at the half and was in command the first half. Just like their previous district game against West Jessamine, the Titans allowed Boyle County to get back in the game. The Rebels took a five-point lead in the second half, their largest of the game before junior Carter Baughman and Faulkner had back-to-back buckets to close the gap. Baughman had a stellar game himself. He had 13 points and hit a big three in the fourth quarter, which got the Mercer student section into a frenzy.

The Titans were able to pull it out and secure their eighth consecutive victory.

“We scheduled this game for a reason,” Hamlin said. “We faced adversity and our kids were resilient. Our play makers made plays when they needed to.”

Hamlin talked about how close this team has gotten throughout the season.

“We are around each other a lot and it’s an old cliché in sports that you become a family,” he said. “Our guys have become so close that we are starting to think each others thoughts. It’s become a brotherhood.” 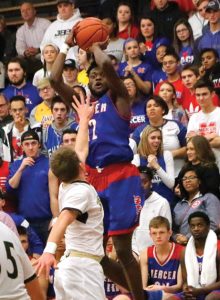 Senior Trevon Faulkner shoots over Boyle’s Reese Smith in the Titans’ 70-62 victory over the Rebels on Tuesday, Jan. 23.