Long simmering tensions between Mercer and Boyle Counties about the management of Boyle County Detention Center came to a head Tuesday, with the Mercer County Fiscal Court voting unanimously to hire a lawyer to look into the financial arrangement which covers BCDC.

“We have run into a fairly serious issue,” said BCDC Capt. Chad Holderman. In order to fix the issue, the system will need to be turned completely off. However, the vendor says that since  the system is more than 20 years old, they might not be able to get it back online.

The vendor, Vulcan Fire Systems, said they can replace the system—the control panel, modules and detectors—for $35,814. Holderman said once work  begins on Feb. 5, the system would be down for 20 working days. Four temporary workers would have to be hired to patrol the jail until the alarm was operational again.

Magistrates Ronnie Sims and Tim Darland asked why the job could not be bid out. Holderman said the joint jail committee had decided the issue was an emergency. Under law, emergencies concerning possible loss of life do not have to be bid out.

The joint jail committee had already decided to pay for the alarm replacement from the jail’s savings account, so the Mercer Fiscal Court had nothing to vote on. Holderman and Assistant Jailer Brian Wofford were only there to answer questions. 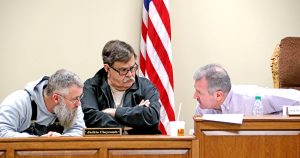