The City of Harrodsburg Board of Commissioners met the future Monday night.

The members of the Mercer County Extension Office’s Youth Leadership Group, which is made up of students from the 6th to 9th grades, attended the board meeting. After watching the city commissioners conduct business, they participated in a question and answer session, where they discussed term limits, city streets and elections.

Commissioner Jack Coleman said that, of the two groups, the most important to Harrodsburg’s future were the Youth Leadership team.

“They don’t care about us,” said Coleman, who was referring to potential businesses who might be looking to relocate to Mercer County. He said they were more interested in test scores at local schools.

Commissioner Scott Moseley also challenged the students to create a Junior Council, a mock deliberative body that would equip the students for their future as the leaders of Mercer County. 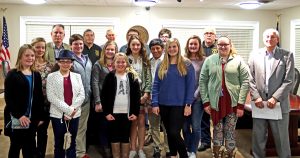