While many people seek opportunities in large cities, Chicago native Chris Bartels  moved to Harrodsburg to pursue his dreams.

“On my first day here I went to Pioneer Days,” he said. “Everyone seemed so nice and happy.”

Bartels previously attended the University of Kentucky, but moved back to Chicago for work. However, the opportunity to earn a degree and participate in college athletics drew him to Harrodsburg.

He spent his first week in town helping clean up the gym in the former Harrodsburg High School building.

As an athlete at Campbellsville, he got a chance to play basketball there.

“That school and gym is special,” Bartels said. “You can just feel the heritage.”

He said adjusting to life in Harrodsburg has had its challenges. One big adjustment has been learning he isn’t just a face in a large crowd any more.

Bartels, who stands at six foot six, said small town life took a while to get used to, but he likes the feeling Harrodsburg gives him.

“The people down here are much more inclusive and inviting. They make you feel like you belong,” he said.

When asked what was one of the biggest things he missed about home, his answer was simple.

“The food,” Bartels said. “Chicago style pizza and hot dogs and other Chicago staples. No one down here knows what an Italian beef sandwich is and that’s heartbreaking.” 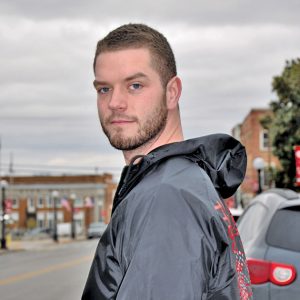 Chris Bartels has found a new home in Harrodsburg while he pursues his degree in business at Campbellsville University. While Harrodsburg has its differences with Chicago, he’s adjusted to small town life.