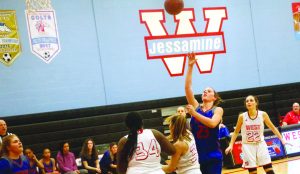 The Lady Titans are unbeatable in the state of Kentucky. Their last loss within the state came nearly a year ago against Male on Jan. 28. Since then, they have rattled off an astonishing 24 straight wins against in-state teams, including an 81-36 trashing of West Jessamine on Thursday, Jan. 11.

The game was originally scheduled for Friday, Jan. 12, but due to weather, it was rescheduled.

Sophomore Channing Lewis scored a game-high 16 points and senior Miss Basketball candidate Seygan Robins added 14. Senior Emmy Souder was third on the team with 9 points and senior Faith Lake scored 8 points. Contributions came from up and down the lineup for the Lady Titans as Head Coach Chris Souder was able to give his younger players a lot of minutes in the second half.

Junior Toni McCombs didn’t score, but impacted the game on the defensive end, which was key to the Lady Titans building a big lead. Calling it a big lead is an understatement. The Lady Titans were up 25-8 after one quarter, and took a 59-13 lead into the locker room. Seventh grader Timberlynn Yeast also made her presence known off the bench. She checked in late in the first half and quickly got a steal and was comfortable taking the ball up the court.

“We started off a little sluggish but we haven’t played in a few days,” said Souder. “We got going and our bench played really well. Channing (Lewis), Toni (McCombs) and I thought Timberlynn (Yeast) came in and gave us good minutes.”