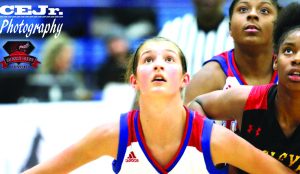 Senior Faith Lake boxes out her opponent during the Lady Titans 76-66 victory over Wesleyan Christian (NC) in the Music City MLK Classic in Nashville on Sunday, Jan. 14. (CEJr. Photography)

After a dominating performance against district rival West Jessamine last week, the Lady Titans were faced with a very tough challenge at the Music City MLK Classic in Nashville.

They faced off against Wesleyan Christian (NC) on Sunday, Jan. 14 and against Hamilton Heights (TN) on Monday, Jan. 15. Mercer County split their two matchups.

Mercer Head Coach Chris Souder talked about how difficult of a matchup this would be prior to the tournament.

“Hamilton Heights, in some polls, are the number one team in the country,” he said. “I also watched film on Wesleyan Christian and they are as athletic as anybody we have played this season.”

Souder knew this would be the ultimate test for his team.

The Lady Titans (17-1) faced off against the Hamilton Heights Hawks on Monday, Jan. 15, in the Music City MLK Classic, losing by a final score of 51-37. This was the Lady Titans’ first loss since their first game of the season back in early December.

In their first matchup in the Music City MLK Classic, the Lady Titans (16-1) faced off against Wesleyan Christian (NC), defeating them by a final score of 76-66.

Robins, who has been big all year, scored a game-high 24 points to go along with 5 assists. Souder also had a big game, scoring 17 points and hauling in a game-high 16 rebounds.