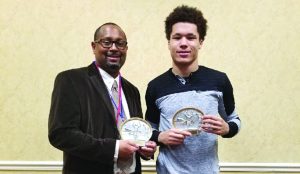 Head Coach Terry Yeast (left) and senior Aaron Johnson (right), pose with their Class 2A Coach of the Year and Male Athlete of the Year trophies presented by the Kentucky Track and Cross-country Coaches Association (KTCCA). (Photo Submitted)

More accolades keep rolling in for the defending Class 2A state champions on the track.

Terry Yeast, Mercer County head track coach, was named Class 2A Coach of the Year by the Kentucky Track and Cross-country Coaches Association (KTCCA) for the 2017 season this past weekend, his second year in a row taking home the award.

Senior Aaron Johnson, who won the state title in the high jump and 300 meter hurdles, was named Class 2A Male Track Athlete of the Year by KTCCA, a first for the Mercer County track program.

Despite winning coach of the year back-to-back, Yeast credited his success to his staff.

“I think it goes back to what we talked about in trying to build tradition in this sport. It is very exciting,” said Yeast. “I can’t take whole lot of credit as the coach, to be honest. Having a great staff and parental support definitely makes my job easier.”

Along with winning coach of the year two years in a row, Yeast has also won back-to-back state championship in boys track. It is safe to say the Mercer track program has a big target on their back going into the track and field season in 2018.

“I never expected all this success to happen so fast in all honesty,” said Yeast. “But I think after I got started and realized there is some people sitting around here that could really help us out.”

Johnson, who will try to repeat as state champion in the 300 meter hurdles and high jump, was humbled by the award and gave credit where it is due.

“Winning this award means a lot to me. It shows that I have worked hard, and that I have great coaches,” said Johnson. “Without the coaches supporting me throughout my journey, the award wouldn’t be possible. I would like to thank everyone who supports me, especially my coaches and my family.”