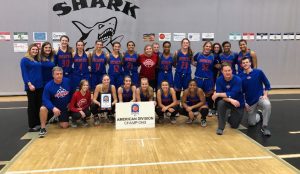 The Lady Titans just keep on winning. After being crowned  Queens of the Commonwealth before Christmas, they took their talents to Florida and swept through the competition there, finishing 4-0 with senior Seygan Robins being named MVP of the Naples Holiday Shooutout. Here is a short recap of their games.

In the championship game against Westlake High School (11-0), the Lady Titans (12-1) showed why they are nationally ranked, defeating them 77-73, on their way to another mid-season championship.

Robins, the tournament MVP, scored a team-high 28 points to lead her team to victory. Senior Emmy Souder added 19 and senior Lexy Lake added 17 to round out the double-digit scoring for Mercer. They made 11 of 22 three-pointers, good for 50-percent from the arc.

It is hard to beat a team that consistently scorches the nets like the Lady Titans do day-in and day-out. Mercer also made 26 of 32 free throws, good for 81-percent.

Faith Lake led the Lady Titans in scoring, with 13 points, and had a lot of help from her teammates. Sophomore Channing Lewis scored 10 points off the bench. Lewis is a very important player for Mercer. She has shown she can consistently come in the game and lead the team, whether its setting teammates up or scoring herself.

Contributions came from up and down the lineup. Junior Toni McCombs had 9 points, Souder had 8 and sophomore Calicia Smith had 7 points.

Recap from the first two games of the Naples Holiday Shootout is in this week’s edition of the Herald.