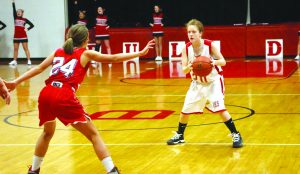 Despite losing to district foe West Jessamine by a final score of 58-19 on Tuesday, Jan. 9, the Burgin Lady Bulldogs had a successful week. They defeated Kentucky Country Day, Fort Knox and Silver Grove for their first three wins of the season.

Against the Colts, the Lady Bulldogs struggled to get into any sort of rhythm all night. They got down early and couldn’t recover from the deficit. Head Coach Chad Terrell said his team didn’t come out with the same intensity as they had in their previous three wins.

“We had a bad practice the day before so the writing was on the wall here,” he said. “I told them that you play how you practice. If you come and you don’t practice hard and you don’t give effort, you always come out stagnant.”

Terrell said he doesn’t care who the opponent is, he just wants them to play hard. “I think a lot of them don’t believe they can win against these bigger schools, but we have to change that culture here. I want them to compete every game,” he said.

Here is a recap of Burgin’s first three victories of the season vs. Fort Knox

The Lady Bulldogs’ latest victory came in a very close game against the Lady Eagles. Mullins notched another double-double, scoring 13 points and grabbing 20 rebounds. Mullins has 49 rebounds in Burgin’s three wins this season. Hungate also completed the double-double by scoring 11 points and hauling in 12 rebounds.

The Lady Bulldogs second win of the season came in another dominating fashion, defeating the Bearcats by a finals score of 51-36.

Contributions came from all over the lineup tonight. Three Lady Bulldogs were in double-figures. Senior Miranda Hungate led all scorers with 19 points and Mullins dominated the boards once again. She tallied 18 rebounds and couldn’t be contained inside the paint. She also added 11 points to complete the double-double. Holton was tied for second on the team with 11 points.

Terrell talked about his team’s win. “I think my three guards really hustled out there,” he said. “I tell them every game their job is not necessarily to score, but make an impact other ways.”

Burgin was also without Hungate the last few games, and Terrell couldn’t be happier to have his leader back on the court. “It’s good to have Miranda back on the team. She’s our leader and all the girls really look up to her,” he said. “Just having her out on the floor really helps a lot.