Mercer County Sheriff Ernie Kelty was injured Monday. Kelty slipped and fell on the icy ground while investigating a crash on Mackville Road.

There were numerous reports of crashes on the icy roads as a result of a wintry mix of snow, sleet and freezing rain. Kelty said his office received at least 40 reports of vehicles that had slid off icy roads, with the worst spots on Mackville and Bohon Roads as well as U.S. 68.

Kelty said he hopes to be back to work soon. While nothing seems to have been broken, he has an appointment with an orthopedic doctor on Thursday for further testing.

Kelty was working an accident where a car had landed on its side. He tracked the driver to a nearby home, where she was sitting on a porch with her child. Once he learned they were okay, he went back to his truck to notify Mercer County EMS. That’s when he slipped on the icy ground.

“I fell back on my right leg,” Kelty said. Despite a flurry of accidents caused by the winter mix on Monday, there were no other reports of injuries.

Winter 2018 arrived with a bang. Record low temperatures have been recorded everywhere from Bangor, Maine, to Waterloo, Iowa, and all the way south to Vicksburg, Mississippi. It was so cold in Florida frozen iguanas were dropping from the palm trees, according to media reports.
On Saturday, New England recorded temperatures in the minus 30s, with wind chills as low as 90 degrees below zero thanks to hurricane-force winds, according to the Weather Channel.

While there hasn’t been much in the way of snow so far this year, Mercer County has been in the deep freeze along with the rest of the nation. During the week running from Dec. 31, 2017, through Jan. 6, the average high temperature was 17 degrees, according to Weather Underground.

Forecasters say Mercer may catch a break from the Arctic weather this week, with a high of 62 called for by Thursday, according to the Weather Channel. However, snow is a possibility by the weekend, and authorities are calling on motorists to make sure their cars are ready for the temperatures.

“Cold weather is just hard on everything on a vehicle,” said Chris Caton of CC Auto. Freezing temperatures can play havoc on batteries, heaters and hoses. It can cause heaters to break down and engines to overheat.

But it’s not just the cold alone that can leave a motorist stranded on the side of an icy road, Caton said. Poor maintenance habits—driving on bald tires, putting off necessary repairs and not maintaining fluids such as oil, antifreeze and windshield washer fluid—also play a part, he said.

“If a car is maintained properly, there’s usually not going to be a problem,” said Caton, who went on to quote Benjamin Franklin: “An ounce of prevention is worth a pound of cure.”

The cold isn’t hard on just cars, it’s also hard on roads. Jason Sanford, the water and sewer maintenance director for the City of Harrodsburg, said his crews have answered 25 calls since Jan. 1. On just Monday, Jan. 8, they had dug up three frozen waterlines by 4 p.m.

“We’ve been pretty busy since the New Year,” Sanford said.

Most of his calls are about turning off water to homes with frozen pipes, he said. Sanford advises homeowners to make sure their crawl spaces are properly closed and to report missing lids on water meters. Anyone with an issue should call 734-2383.

“Just leave a message,” said Sanford. “We’ll get to you.” 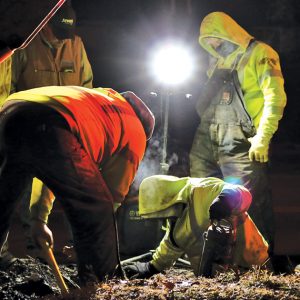 Work crews from the Harrodsburg Water and Sewer Maintenance Department have been working around the clock repairing waterlines damaged during the recent deep freeze. 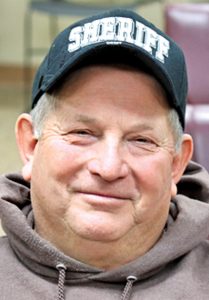