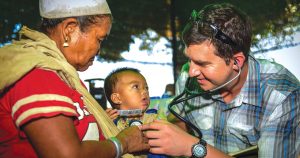 Lt. Col. David Greenburg, an ophthalmologist with the U.S. Army, examines a Lao child at a clinic held by DPAA at a former crash site in Oudomxay Province, Laos. “It’s one of the things I’m most proud of in my life,” Greenburg said.

Officially, the Vietnam War ended in 1973. But in many ways, it has never stopped. Not for the soldiers, sailors, airmen and Marines who came back from the war, and not for the families and loved ones of the 1,600 Americans who have still not been brought home.

One Harrodsburg native recently took part in a trip to Laos to try to find those who are still missing in action.

Lt. Col. David L. Greenburg is an ophthalmologist with the U.S. Army currently stationed in Hawaii. In November, Greenburg journeyed to Laos as a volunteer with the Defense POW/MIA Accounting Agency (DPAA).

“Their job is to fully account for any soldiers, sailors, airmen and Marines lost in a conflict,” Greenburg said. “They do stuff all over the world.”

The ultimate aim is to return missing service members to the U.S. and contact their families.

The U.S. was never officially at war with Laos, now the Lao People’s Democratic Republic, but the tiny nation was frequently the target of American bombing missions. According to the DPAA website, of the 1,602 American service members still missing, 294 are suspected to be somewhere in Laos.

After nearly 50 years, Greenburg said finding the missing warriors was like conducting an archaeological excavation.

“It’s a lot of digging and sifting through sediment,” he said.

Most Lao are subsistence farmers, practicing mixed use agriculture. Farm animals have free run of the countryside.

At one site, a team may have found the crew members from a CIA plane that went down in Laos. They found a set of wings pilots would have worn back then as well as human remains, which were sent for DNA analysis.

“We won’t know for sure for probably six months to a year,” Greenburg said.

While excavating a crash site in the Xieng Khouang province, DPAA volunteers joined a Day of Remembrance commemorating the death of 374 Lao. During the war, entire villages relocated to mountain caves to escape bombings. In December 1969, an American bomb exploded outside the Tham Piu cave entrance, killing almost everyone inside.

“The entire village, except for one child, was inside the cave and killed,” Greenburg said.

It was the first time American service members attended the ceremony.

“This was an important reminder for the U.S. personnel that loved ones were killed, missing, or injured on both sides of the conflict,” said Greenburg, who was not able to attend. “Aside from the Americans who were killed in Laos, thousands of Lao died fighting in support of the Royal Lao government, the U.S. ally, and the Pathet Lao, the Lao Communists.”

DPAA missions have more than one objective, he said.

“Although the primary mission of the DPAA is to completely account for lost or missing soldiers, sailors, airmen and Marines, a secondary benefit is that the completion of this honorable mission is a great opportunity to build bridges with people and governments with whom we have had poor relations historically,” Greenburg said.

For the people of Laos, too, the war has never really stopped. Greenburg and a medic conducted MEDCAPs—Medical Civil Action Programs—for the Lao assisting with the excavations as well as nearby villagers. Greenburg examined a farmer in his 50s who was complaining about chronic pain and loss of function in his leg. It had been mangled by a land mine 20 years earlier.

“Many Lao children and farmers have been injured since the conclusion of hostilities when they found and inadvertently detonated mines or cluster bombs,” Greenburg said. While there are international and local efforts to remove the mines, it’s a slow and expensive process, and injuries are still common, he said.

Medical care is available in Laos but limited, he said. Hospitals often don’t carry antibiotics, so what are considered minor illnesses in the West can be lethal in Laos.

“The typical Lao person cannot afford or have access to common medications like Tylenol or ibuprofen,” said Greenburg.