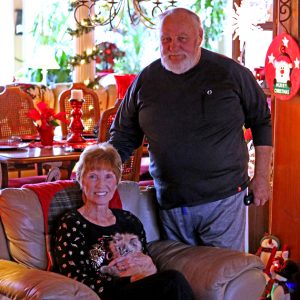 Lori and Roy Jasper and their new kitten, Ernie, enjoy the warmth in their Herrington Lake home. 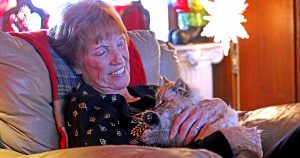 Lori Jasper cuddles the feral kitten she and her husband Roy have adopted. The couple have named the kitten Ernie after Sheriff Ernie Kelty, who rescued it.

It was looking pretty bad for the kitten named Ernie. It spent 11 hours frozen to a boat dock on Herrington Lake, but what could have been a sad story had a purr-fectly happy ending.

When Roy and Lori Jasper first saw Ernie on their security monitor, they didn’t think a whole lot about it. Stray cats are plentiful on the lake, and Lori feeds them.

“I can’t stand to see them go hungry,” she said.

Many lake residents consider the feral cat population a problem, but Roy said there was an upside to having them around.
“We don’t see no snakes or mice around here,” he said.

The couple said when they first spotted the kitten on their dock on New Year’s Day he seemed fine. They went to Lexington on Tuesday morning, where Lori underwent eye surgery, and they didn’t worry about it.

But when they returned later that day, the kitten was still there. It appeared to be frozen to the steel dock.

“All he could move was his little head,” Roy said.

“I couldn’t stand to look at it,” Lori said. “It about broke my heart.”

The Jaspers wanted to help, but the couple—who are both in their 70s—were nervous about climbing down the stairs in the freezing cold. The high temperature that day was 21 degrees, according to Weather Underground, with a windchill that dropped down below zero.

So the couple called for help.

Mercer County Sheriff Ernie Kelty was investigating a complaint on Curdsville Road in Burgin when the Jaspers’ call for help came through. Kelty drove to their home, where he saw the frozen kitten on the security monitor.

He called the fire department, who recommended using warm water to free the animal. As he went down the steps, he said it sounded almost like a human being crying for help.

However the kitten wasn’t exactly glad to see him, Kelty said.

“He had an attitude at first,” said the sheriff, who used the warm water to free the cat’s paws. “When I got him loose, he laid over in my arm.”

Kelty wrapped the kitten in his sweatshirt and carried it to the Jaspers. He wasn’t just carrying it somewhere warm. He was carrying it home.

“I’m glad we could help the kitten and help the Jaspers,” Kelty said. “We care about everybody.”

Lori spent the next three hours holding the kitten and keeping it warm. Roy said Ernie—the kitten, not the man it’s named after—has made a full recovery.

The Jaspers have been married for 55 years. They’ve spent the last 11 years living on the lake.

“There are a lot of good people in Mercer County,” Roy said. “We’re glad we moved here.”

And so is one little cat named Ernie.