Three people have died in Lexington from flu-related complications, according to the Fayette County Health Department, and officials are advising the public to get their flu shots now.

One of those officials is Glenn Phillips, the emergency management director of Mercer County.

“Get the shot,” Phillips said.

That’s his advice even though he is currently suffering from the flu, even after getting the flu shot. He’s been suffering with the flu since Christmas, he said.

“It hit and it hit hard and fast,” Phillips said. Asked on Friday if he was feeling better, he said, “Better than I was.”

He said he had contracted a type B strand of influenza, which is not one of the four viruses this year’s vaccine was made to prevent.

According to the Centers for Disease Control and Prevention (CDC), the seasonal influenza vaccine is designed to protect against three or four influenza viruses which research has indicated could be most likely to spread and cause illness during the upcoming flu season.

Phillips said the decision  on which strands of the flu to include in the vaccine are made at least six months before the season begins.

“It’s a big gamble which way it’s going to turn out,” he said.

Flu can be very contagious. Symptoms include fever, headache, cough, sore throat, runny nose, sneezing and body aches. Persons who develop flu symptoms should seek medical advice about the need for a medical evaluation or treatment with an antiviral drug, which could shorten the course of the illness or reduce its severity, according to the CDC.

Adequate supplies of flu vaccine are available for this year’s season. Flu vaccinations are available at the Mercer County Health Department, as well as at local pharmacies.

For more information, please call the Mercer County Health Department at 734-4522 or visit the Kentucky Department for Public Health online at healthalerts.ky.gov. 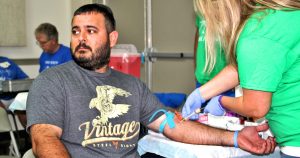 Chris Barr gets his blood drawn by Jordan Carrier during last year’s Haggin Health Fair. It may not be fun getting stuck with a needle, but it beats having the flu, which can sometimes lead to fatal complications, especially for the very old and the very young.