It’s the first of the new year and the elections are bearing down upon us. Candidates for local and state offices have until Jan. 30 to apply to run.

In the race to represent the 2nd congressional district—which includes Mercer County—in the U.S. House of Representatives, Republican incumbent Brett Guthrie of Bowling Green is being challenged by Democrats Brian Pedigo of Glasgow and Grant Short of Owensboro.

In state races, Democratic Carolyn Dupont is challenging Republican incumbent Tom Buford for the 22nd senate district, which includes Mercer County. Both candidates are from Jessamine County. Republic Kim King has filed to run for reelection as state representative for the 55th district, which includes Mercer County. So far, no one has filed to challenge King.

All county offices are up for election this year, along with city legislative bodies and mayor. In most county races, only incumbents have filed to run so far, with the  exception of the property value administrator’s office, where Republican Jessica Elliott is challenging Democratic incumbent David Best. Democrat William Moore has filed to run for county jailer’s office. Current Jailer Bret “Chambo” Chamberlain has not yet filed.

Democrat William McFerron has filed to run for constable of district 2 after being appointed to serve out an unexpired term by the fiscal court.

Candidates have not yet filed for other county offices, including coroner, surveyor, district 2 and 3 of the Mercer County Board of Education and the four remaining constable positions.

In Harrodsburg, Mayor Eddie Long and Commissioner Charlie Mattingly are the first to file to run.

In Burgin, no one has yet filed for the mayoral, city council or school board races. Burgin candidates, who do not have to run in a primary, do not have to file until April.

Anyone interested in becoming a candidate for any office can find more information on the Secretary of State’s online Becoming a Candidate portal at sos.ky.gov. 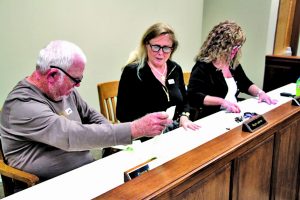 The Mercer County Board of Elections—Virgil Monroe, Donna Holiday and Beth Jenkins—certify the vote tally during the 2016 election. Even though it seems like that election has never ended, the 2018 midterm elections will happen on Tuesday, Nov. 6, 2018.