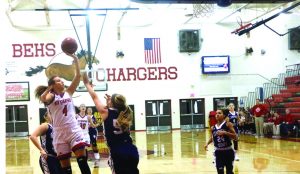 Gunnar Gillis (23) and Carter Baughman (2) trap LCA’s Austin Hall (with ball) on the baseline during the Titans loss to the Eagles on Wednesday, Dec. 20. (Photo by Arpan Dixit)

After losing their first game of the season against Riverdale, the number one ranked team in the nation, the Lady Titans (7-1) have won eight in a row, most recently defeating Campbell County (10-0) by a final score of 74-71 in the semi-finals of the Queen of the Commonwealth tournament on Thursday, Dec. 21, at Bullitt East High School.

The Lady Titans handed the Lady Camels their first loss of the season after starting the season with 10 straight wins.

Senior Miss Kentucky Basketball candidate Seygan Robins had her best game of the season. She flirted with a triple-double, notching 22 points, 7 assists and 6 rebounds.

The Lady Titans have now defeated the No. 2 and No. 3 teams in the state. Those wins will certainly pay dividends in March because they both had a tournament-type feel to them.

“She rises to the occasion and that’s why she should be Miss Basketball in my opinion” said Lady Titans Head Coach Chris Souder. “People have been asking me what has been wrong with Seygan? But I tell them nothing. She hasn’t shot the ball well, but she’s doing everything else right. She’s playing hard, leading us in assists and leading us in steals. Big time players step up in big games like this one.”