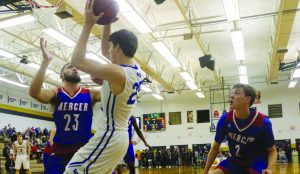 Gunnar Gillis (23) and Carter Baughman (2) trap LCA’s Austin Hall (with ball) on the baseline during the Titans loss to the Eagles on Wednesday, Dec. 20. (Photo by Arpan Dixit)

The King of the Bluegrass is the biggest mid-season tournament in the state, which brings teams from all over the Commonwealth as well as from out of state to Fairdale High School.

The Mercer County Titans (6-1) faced off against the Lexington Christian Eagles (3-3) in the first round, losing by a final score of 65-50 on Wednesday, Dec. 20.

Head Coach Josh Hamlin was frustrated after the game, but knows his team lost to a very good team, a top 10 team in the state.

“Credit to Lexington Christian (LCA), they did a really good job on us in the first half,” he said. “We had some good looks, and we just didn’t make them tonight. We were too stagnant offensively, only ending the game with three assists, and that’s not good enough.”

LCA was playing without one of their top players and top juniors in the state, Kyle Rode. Unfortunately, the Titans couldn’t take advantage.

Faulkner did all he could in the second half to stay in the game. He scored 13 points in the third, including three three-pointers coming out of halftime. The Titans trailed by nine, 40-31, after three quarters of play.

The fourth quarter was much of the same for Faulkner. He scored 13 more points in the final period, but it was too little too late for the Titans. They were able to trim the LCA lead to five points after a couple of fast break buckets by Faulkner and Divine to start the quarter, but the big men for LCA were too much for Mercer.

Carter Hendrickson for the Eagles notched a double-double, 16 points and 12 rebounds, while hitting two threes on the night. Austin Hall scored a team-high 17 points.

“I thought we played a much better game in the second half,” said Hamlin. “The game was not indicative of the score, especially in the second half. We started fouling with about three minutes to go. We just have to take our opportunity in our next game and come out strong.”