Harrodsburg Police Chief Billy Whitenack apologized for the bare walls in his office. Whitenack is retiring on Dec. 31 after serving 20 years as a police officer and there is hardly anything left of him in his office.

But there will be plenty to remember Billy Whitenack at police headquarters—from the new sign he and his officer built out front to the deck and privacy fence in the back.

Whitenack said he’s proud that all of the painting and repairs to the headquarters were done by his officers.

Then there are his other accomplishments, such as finally getting the department accredited, which will lead to a 10-percent reduction in the city’s insurance premiums.

Whitenack is from Salvisa and began his law enforcement career with the Anderson County Sheriff’s Office.

He joined the Harrodsburg Police Department in 2008 as a patrol officer and was named chief in 2012.

Cpl. Tony Godbey, who  started with the department the same year, remembers talking to Whitenack about all the changes they’d make if only they got the chance. Then Whitenack got the chance.

“He’s turned this department from a dysfunctional mess into a department I’m proud to work for,” Godbey said.

Jo Pike, senior clerk in the records department, also praised the changes Whitenack has made the last five years.

“It’s just a better aura around here, if that makes sense,” said Pike, who’s worked under four different police chiefs. “There have been so many improvements.”

It’s not just because Whitenack got her the first raise she’s received in the 25 years she’s served with the department, it’s the changes in the way personnel are hired and trained, and how he’s managed to find extra funding by reselling military surplus equipment the department gets free from the federal government. She said he’s raised $150,000 since 2015.

Among the people who don’t want Billy Whitenack to stop being chief of the Harrodsburg Police Department is Whitenack, who counts the day he was sworn in as a police officer as one of the proudest moments of his career.

But the possibility of losing some of his retirement benefits  during a reform of the commonwealth’s underfunded pension system forced his hand.

“I hadn’t even thought of retiring until they started talking about messing with it,” Whitenack said.

He notes Gov. Matt Bevin spent $1.4 million on a study.

“I wish they’d dropped it into the retirement system,” Whitenack said. 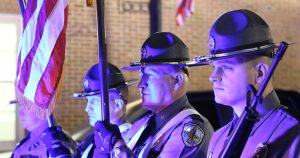 Chief Billy Whitenack, pictured second from right marching in the Harrodsburg Christmas Parade, is retiring from the Harrodsburg Police Department after 20 years of police work with the HPD as well as the Mercer County and Anderson County Sheriff’s Offices. Whitenack’s officers praise him for the changes he’s made to the HPD. “It’s been a good ride,” Whitenack said.