The Harrodsburg Herald took a look back at 2017, which has turned out to be one of the most contentious years in American history.

Locally, the top story was Apple’s announcement of a $200 million investment into Harrodsburg’s Corning Inc. This was the first product of Apple’s $1 billion Advanced Manufacturing Fund designed to fuel production and skilled jobs for technology-driven manufacturing.

Corning Inc. manufactures Gorilla Glass for Apple’s iPhone and iPad among other products. 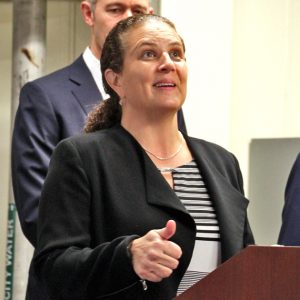 Amy Porter, manager of the Corning Glass facility in Harrodsburg, gives workers the thumbs up sign at the announcement of Apple’s $200 million investment. Corning also celebrated their 65th anniversary in Harrodsburg this year.

The announcement was made by Senate Majority Leader Mitch McConnell ,who said parts from 30 different nations built the iPhone he held in his hand, “but the part we touch comes from Harrodsburg, Kentucky.”

What were the other top stories of 2017? Find out in this week’s issue of the Harrodsburg Herald.