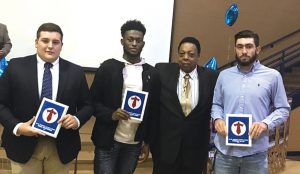 An annual banquet is a time to reflect and celebrate  the accomplishments of the season and also a time for players’ families to come together and celebrate their child. Many awards were handed out to seniors and underclassmen throughout the night.

Senior Noah Sheperson received the Academic Award for his achievements in the classroom. The John Buchanan Hammer Award went to senior Trevon Faulkner for his ability on defense.

The Titans reached the Class 4A state quarterfinals for the second straight season. More awards are posted in this week’s issue.