Mark Stratton has found a way to give back to his community this holiday season, while honoring the memory of his mother.

Stratton has collected dozens of bicycles to repair and gift to children in the community. He said he thought of the idea while he was visiting his mother’s grave. His mother, Linda Stratton, passed away on March 2, 2016.

“I would see my mom go to the store and buy food for those in need, give clothes to people, and sit down to talk to kids,” Stratton said.

He reached out to Facebook marketplace groups asking if anyone had any bicycles that needed repairs  they wouldn’t mind donating to children in need.

“Word of mouth spread quick, it surprised me quite a bit,” Stratton said.

Photos of bicycles from Lebanon, Lexington, Louisville and everywhere in between started to arrive in Stratton’s inbox. The Harrodsburg Fire Department donated bikes and equipment as well.

Stratton grew up working on bicycles, a skill set he continues to work on as he learns about how newer bikes are constructed and repaired.

Each bike presents its own unique repairs or challenges, but as he completes them, there is nothing like seeing a child enjoy the work he put into bringing the bike back to life.

“The main reason I do this is for the kids,” he said. “It used to be kids would play on bicycles, now it’s cell phones. I love to see them on bikes and being active.” 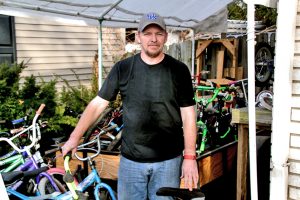 Mark Stratton has given 40 refurbished bicycles to children in need to honor the memory of his mother.