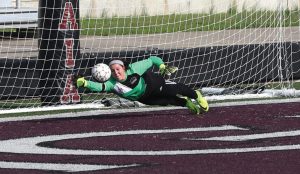 Amanda Howard making a diving save during her senior season at CU. Howard leaves the program holding school records in saves (452) and shutouts (31). (Photo submitted by Denise Howard)

Playing sports at the collegiate level is an accomplishment in itself, but being named an All-American is an honor that not a lot of athletes can claim. However, former Mercer County Lady Titan Amanda Howard has that claim, recently being named Second-Team All-American by the National College Christian Athletic Association (NCCAA) for her accomplishments as the goalkeeper for the Campbellsville University (CU) Lady Tigers soccer team. She was named First-Team All-American her junior season, and concluded her senior season with Second-Team honors.

“Being named an All-American throughout my career is just amazing to me. At first, I didn’t really understand how much of an honor it was, but once I realized it is one of the highest honors an athlete could receive, I was just speechless,” said Howard. “To know that all my hard work and time I put into this incredible sport all my life had been noticed by others was just remarkable. I am proud and so very thankful.”

In her freshman year, she re-wrote the record books in her first season, recording 133 saves, breaking the previous record set by CU alum Brandie Hagerman. CU also made it to the NCCAA Tournament for the first time in program history.

In her sophomore year, she played in 22 games, allowing only 12 goals and was named first team all MidSouth Conference (MSC) and is the first ever National Association of Intercollegiate Atheltics (NAIA) First-Team All-American in program history.

In her junior year, she finished with 90 saves and seven shutouts, registering double-digit saves in two games. She was also named First-Team All-Conference, Academic All-Conference, Second-Team NAIA All-American and Third-Team NCCAA All-American. CU made it back to the NCCAA Tournament and reached the semi-finals.

In her senior year, she set programs records in career saves (452) and shutouts (31), while tying the record for goals allowed (97) in her career. She was also named Second-Team All-MSC and Academic All-MSC for the second straight season. Howard was named NCCAA Second-Team All-American in her final season.

No one has supported Howard throughout her career more than her parents, Greg and Denise Howard.

“The support of my parents is truly remarkable. Ever since I started the game of soccer they have been there,” said Howard. “Having my mom there taking pictures and showing support is just awesome and my dad, ever since I can remember, has always been behind the goal coaching me through. I would definitely not be who I am today without all of their support. My support system means the world to me.”

Howard also mentioned the support of her grandparents, Dru and Duane Hall, who were determined to attend every one of her games her senior year.