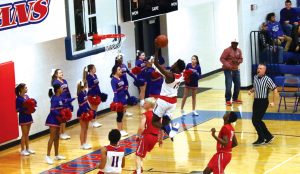 Senior Trevon Faulkner (with ball) floats through the air for two of his game-high 47 points, a Mercer County record. The Titans defeated the Colts by a final score of 89-77 on Friday, Dec. 15. (Photo by Arpan Dixit)

The Mercer County Titans (5-1) basketball team earned their second district win of the season, defeating the West Jessamine Colts (3-0) by a final score of 89-77 on Friday, Dec. 15.

Senior guard Trevon Faulkner broke the Mercer County school record for points in a game with 47. Faulkner held the previous record of 46 against Wayne County last season. He also finished with seven rebounds and five assists.

He was also recognized before the game for scoring 2,000 points in his Titan career and signing to Northern Kentucky University.

Senior forward Gunnar Gillis arguably had his best game of the season, tallying nine points and 11 rebounds (seven in the first half). Head Coach Josh Hamlin raved about Gillis’ play.

“He is starting to get in a lot better basketball shape coming  over from football,” he said. “Tonight, the fans saw a classic Gunnar Gillis game. He was a warrior out there and played exceptionally hard. I told him that was one of the best post games I’ve seen when it comes to the little things. He did a lot of the dirty work that goes unnoticed and I’m just really proud of him.”