Burgin City Councilman David R. Peavler wants to know what the Mercer County Sanitation District is going to do about Burgin’s torn up streets.

Peavler, who said he was not speaking as an official representative of the City of Burgin, appeared before the Sanitation District’s board  of directors last week to find out.  He said a snow plow had been damaged after striking a high manhole cover, and the rest of the streets were not in good shape.

“We have whole streets that look like crap,” Peavler said. “In between the manholes is like a washboard.”

“A lot of these roads and streets are already on our punch list,” said James Dunn, chair of the District board of directors. However paving season was over and there was little the District could do this year, Dunn said.

Liz Kuypers Dienst, a municipal engineer with Strand Associates Inc. who works with the District, said there were other limits on what they could do. The only thing contractors could be held accountable for was settling.

“We did the best we could for this time of year,” Dienst said.

Peavler especially criticized Todd Johnson, the final contractor to finish work. Unlike the other two contractors, Johnson did not subcontract the paving work out, said Peavler, who called money paid to Johnson to pave Burgin’s streets “wasted.”

“Now we’ve got to go back and repave the streets,” Peavler said.

The District does not have money left in the sewer project’s budget to repair all of the streets. Even if they did, Johnson has the right to make any repairs first.

Wendell Gooch also complained about the smell at his house, which he blames on the new sewer.

“Before the sewer system started, we had no issues,” Gooch said. “What are we going to do about it?”

District Executive Director Mike Sanford said the smell might be coming from an abandoned septic tank, but it would be difficult to find the source.

“We can’t find the silver bullet or the smoking gun,” Sanford said. 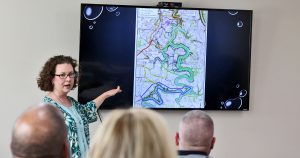 Liz Dienst, an engineer with Strand Associates of Lexington, reviewed the Sanitation District’s 20-year-plan with board members. “We’ve got a lot of work to do,” Dienst said.