It’s an early Christmas present from the state to local commuters. Both lanes of the Brooklyn Bridge, which connects Mercer and Jessamine Counties, are open.

Work on the bridge, which carries U.S. 68 over the Kentucky River, was finished last week on Thursday, Dec. 7.

The opening marked the first time this year that all four main routes into Mercer County have been open at the same time.

Traffic had been reduced to one lane since August after the contractor discovered unexpected deterioration and pulled out of the project until the state revised the contract.

The work has been completed for the current contract, said Natasha Lacy, information officer with the Kentucky Transportation Cabinet, Department of Highways.

Lacy said the KYTC Division of Bridge Maintenance has determined that a different route will be taken to completely repair the Brooklyn Bridge.

“The Division will reevaluate the issue in the future,” Lacy said. 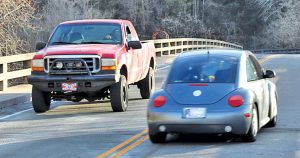 While both lanes on the Brooklyn Bridge are now open, the state is still considering how to completely repair the bridge.