It looks like Campbellsville University is having growing pains. Again.

Campbellsville officials said they’ve outgrown their new addition before its grand opening in January. As a result, they’re looking to add to the Harrodsburg campus again.

On Monday night, Wesley Carter, executive director of University Outreach at Campbellsville, told the Harrodsburg City Commission the university is in the final stages of planning a third building at the Conover Education Center. Carter said the proposed building would house programs for education, social work and criminal justice.

But that’s not all. He said the university was looking at acquiring additional property, which would allow even further expansion. “It’s a little bit early but we’re making progress,” Carter said.

Further expansion would allow Campbellsville to offer programs for nurse-practitioners, chiropractors, registered nurses and licensed practical nurses. He said the university is also looking to add programs for HVAC and HVAC-R. Some of the jobs for graduates of the new programs would offer incomes in the $75-150,000 range, he said.

Carter said the economic impact of the campus was big. “We believe this will bring 100 new jobs to Harrodsburg over the next three years,” he said.

These are trying times for small private colleges across the nation and here in the commonwealth. Ever since the financial crisis, students and families have grown reluctant to borrow large sums of money to pay tuition, forcing small schools to offer discounts which hurt the bottom line. St. Joseph’s College, a 900-student school in Indiana, suspended academic operations this spring. In 2016, St. Catharine College, a Catholic school outside Springfield, shut down. In 2014, Mid-Continent University, a Baptist school near Mayfield, shut its doors.

However, Campbellsville has defied the trend. 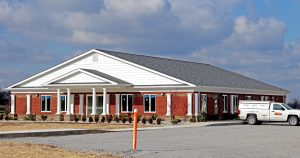 Campbellsville University officials say they’ve outgrown the addition before they finished construction on it. They are planning another addition as well as possibly purchasing more property.

Officials said they had originally expected to have 60-80 students enrolled by the third year in Harrodsburg. Carter said attendance is currently over 300 and growing.

Campbellsville’s welding program, which is being housed at the Hughes-Jones Area Technology Center, should launch in the second week of January, he said, right around the time the university opens its second building. He invited the commissioners to the grand opening.

Carter thanked the city commission for their support. “It takes all of us working together collaboratively,” he said.