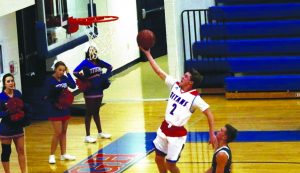 Junior Carter Baughman steals the ball and drives in for two. Baughman had a game-high 26 points and was a menace on the defensive end. The Titans defeated Garrard County by a final score of 89-70 on Monday, Dec. 4. (Photo by Arpan Dixit)

It was a career night for Mercer junior Carter Baughman during the Titans 89-70 victory over Garrard County on Monday, Dec. 4. Baughman scored a game-high 26 points and was a force on the defensive end, and that was evident on the first possession of the game. Baughman stole the ball and drove down the court for the first two points of the game for Mercer. He tallied over six steals, which led to many points on the other end for the Titans.

Head Coach Josh Hamlin has seen improvement in his point guard since the summer and is glad Baughman is finally benefitting from all those hours in the gym.

“Carter just has a great approach to the game,” said Hamlin. “He’s just been very consistent since May ever since I started. He’s constantly in the gym, working on his craft and his ceiling is raising.”

Hamlin said Baughman’s on-ball defense has made the Titans a great defensive team at the start of the season.

Senior Ty Divine, who is getting used to playing varsity basketball for the first time in his career, and seems to be doing just fine. Hamlin praised the way Divine approaches the game and is excited to see him develop.

Hamlin said Divine constantly brings energy to the team and despite this only being his first year of varsity basketball, his teammates already look to him as a leader.

“The guys really respect him and that speaks volumes to the type of kid Ty (Divine) is,” said Hamlin.

Senior Trevon Faulkner had a quite night on the scoring end, but impacted the game in other ways. He scored 16 points, but pulled down numerous rebounds and was setting up his teammates throughout the night.

“He had numerous opportunities on fast breaks where he could have just easily finished, but looked to get everybody involved,” said Hamlin. “His maturation as a leader on and off the floor is going to be really big for us down the stretch.”

Faulkner has the ability to take what the defense gives him and make the right play, and he did throughout the night, setting up his teammates when driving to the basket and making the unselfish play. Through the first three games, Faulkner is averaging 22 points and 10 rebounds.