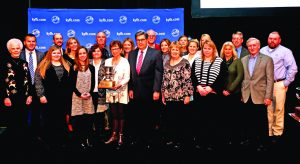 Mercer and Butler Counties tied for the award,  which recognizes the county for outstanding programming and for having a positive impact on both the community and membership. This is the first time there has been a tie.

Leaders from Mercer and Butler Counties received the award at a recognition breakfast held Friday, Dec. 1, during the 98th KFB annual meeting at the Galt House Hotel in Louisville.

The award was bittersweet for the Mercer County Farm Bureau (MCFB) this year, after the loss of their agency manager, Leon Mayo, in November.

“It was pure excitement when we found out we won,” said Mayo’s daughter, Libby Stocker, an agent at MCFB, “but it was still just sad because he wasn’t there. Still, there was a lot of pride, because he worked so hard for it and winning three straight years was his biggest goal.”

The office that wins the “Top County” award three consecutive years gets to keep the perpetual trophy.

“It took so many people, including the staff and board members, working together toward the same goal to win the award,” said Stocker.

“My father was so dedicated to the Farm Bureau members and to the community. He would have been so proud and thrilled to see his goal realized,” she said. “He definitely ended his career on top.”

City To Install Guardrail At Essity

How To Vote In Special Election On Nov. 2