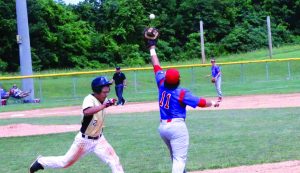 Noah Irvin, recently committed to Southeastern Illinois College to further his education and baseball career. Pictured above is Irvin stretching out for a ball during the 12th region tournament last season against Boyle County. (Photo by Arpan Dixit)

The state of Illinois must be heaven for baseball players, at least that seems like the case for a couple of kids from Mercer County.

Senior Noah Irvin joins fellow senior Joseph Stoeckinger and 2017 Mercer graduate Tanner Robins to play college baseball in Illinois. Irvin decided last week he wanted to further his education and baseball career at Southeastern Illinois College (SIC) in  Harrisburg. A lot of kids who graduate from a small town like to stay in-state and close to home, but not Irvin.

“I chose SIC because I thought they were the best fit for me and I wanted to get away from home,” said Irvin. “I like the small environment of the school.”

Irvin’s parents, Michael Irvin and Elizabeth Edwards, have been extremely helpful during this process and Irvin said they gave him the correct guidance he needed, but they still let him choose the school he wanted to go to.

“My parents have always been there for me in everything I’ve ever done and always supported me,” he said. “My grandmother, Debbie Norman, has always been there as well. They come to every single game, home or away, and always pick me up when I’m down. I wouldn’t trade them for the world.”

Irvin said his inspiration to play baseball came from his dad, who has always pushed him and taught him the game. “He has taught me how to be a better baseball player as well as a better man,” said Irvin. He is coming off his best year as a Titan last year. In 26 games played and 96 plate appearances, Irvin had a .246 batting average, 20 hits, 12 RBIs and nine runs scored.

“He has helped me get my name out there to schools and he has a lot to do with me getting an opportunity to play at SIC,” said Irvin. “He communicated with their coaches a lot and has helped me elevate my level of play and molded me into the player I am today,”

“He has helped me become a better baseball player by just looking at the game as just a game,” he said. “He said to always have fun and bring a ton of energy every time out on the field.”

Irvin also attributed his success to former Mercer Head Coach Jeremy Shope and assistant Austin Horn, who are now at Whitley County High School. Irvin said they taught him a lot about baseball and how the game is like life. “It’s going to go your way some days and some days it’s not,” he said.

Irvin also wanted to give recognition to his middle school coach, Chris Caton. “I can always count on him to be there for me. He is a great coach and even a better person,” he said.

He was also on the football team this past fall and said that has benefited him. “Playing football really helped me get stronger and helped me learn that there are ups and downs. Coach David Buchanan is an amazing person and coach and has helped me become a better person and player in everything I do.”