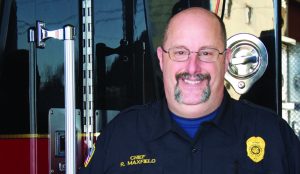 Ric Maxfield retires confident in the fire prevention methods he has taught over the years, and has the highest confidence in the team he leaves behind. (Photo by Dalton Christopher)

Nearly 20 years ago, Ric Maxfield met his wife, married her, and moved to her native home of Harrodsburg. Nearly two decades later, he has lived out his life long dream and found a home in the process.

Ric Maxfield always dreamed of putting out flames. His father and grandfather paved the way, as Maxfield is a third generation firefighter.

Maxfield began serving Harrodsburg in 1999 after graduating from Eastern Kentucky University, where he met his wife. He began working as a volunteer fireman before finding his way into the chief’s chair.

As he looks back at his career, several notable fires stand out. The opera house fire and recent fairgrounds fire come to mind. One moment in particular he recalls was an encounter with a man he had rescued from a vehicle.

“We were helping collect for charity one day, a car pulled up with a guy holding a couple of bucks smiling at me,” Maxfield recalled. “He said you don’t remember but I had a really bad accident and I remember seeing you getting me out of the car and getting me to the ambulance.”

Experiences like that are what make the job worth it, even though the outcome is never guaranteed.

“A firefighter is there at your worst day and helps to take care of you,” he said.