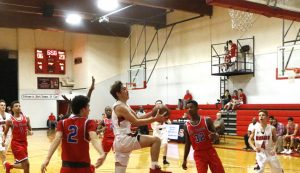 A young team with no seniors will experience growing pains at the beginning of the season, and that is definitely what the Burgin Bulldogs basketball team is going through early in the season.

The Bulldogs dropped their first game to Trimble County by a final score of 78-31 on Tuesday, Nov. 28. Junior Ethan Kestler led the Bulldogs in scoring with 11 points.

“This was the first varsity game action for majority of the team,” he said. “Trimble County was very physical and punished us on the boards. We will have to get stronger and more aggressive to compete in games like this.”

They dropped their home opener against St. Francis 61-41. Hurst and Tyler led the way for the Bulldogs with 14 points each. Martin scored four points and Kestler had three points. Sophomores Jason Carey and Seth Martin added two points, along with seventh grader Hunter Reed.

“Well one thing is that we went 8/18 from the free throw line and missed a ton of layups,” said Irvine. “That’s a lot of points we left on the board and I counted four offensive rebounds that they (St. Francis) were able to score on.” Irvine said without those miscues, his team would have had a great chance of coming out on top.

“I thought we scrapped and battled and played really hard compared to our previous game,” said Irvine. “Maybe being at home was more comfortable for them, but that was a good step in the process from what I saw in the second half compared to the first.”

Their most recent game, against Brown, was a close one but the Bulldogs came up just short, losing 57-66. Kestler had his best game of the season, and arguably his Burgin career against Brown. The junior had a game-high 27 points. was second with 12.

“We had too many turnovers to win, around 10 per quarter,” said Irvine. “We made a nice comeback in the fourth quarter after being down nearly 20 points earlier in the game. This was a small step for us and I believe we have improved every game.”

The Bulldogs will be back on the hardwood Friday, Dec. 8, when they travel to Robertson County. Tip off is set for 6 p.m.