The Josh Hamlin Era began with a convincing victory over the Shelby County Rockets by a final score of 65-45 on Tuesday, Nov. 28.

Hamlin talked about getting his first game and win out of the way.

“I thought we played well in the first half, we jumped out to a 39-14 lead and I think we ran into some tired legs,” he said. “This is really the first opportunity for our guys to get up and down the court and I think it showed tonight.”

Leading scorer for the Titans was senior Trevon Faulkner and junior Carter Baughman with 14 points each. Baughman did a solid job running the offense in his second year starting at the point. He was able to run the offense smoothly and has proven he can handle the ball in pressure situations.

Baughman also had quick hands, disrupting the passing lanes, which led to points at the other end. Faulkner didn’t have the game that he is quite used to having, but he did have a couple rim-rattling dunks to fire up the Mercer crowd.

Senior Aaron Johnson came in and gave the Titans great minutes, scoring 12 points. He was able to do what he does best, which is crash the boards. Johnson also had a couple dunks in the second half that fired up the Titan bench and student section.

Mercer quickly jumped out to a 10-point lead in the first quarter before Shelby County had to call a quick time out to regroup.

The Titans led 39-14 at halftime and never let it get under 15 points the rest of the way.

A couple new faces were out on the court for the Titans. Senior Ty Divine, who’s in his first year playing varsity basketball, struggled in his first game but Hamlin knows he is the type of kid who will immediately put this game behind him.

“I went up to him and hugged him after the game and told him we got out first one out of the way,” said Hamlin. “It was also my first game so to be able to get that out of the way and get the win was great.”

Senior Trey Miller, along with sophomores Jamisen Lewis and Bryson Yeast also got a taste of their first varsity action and Hamlin knows they will get more comfortable as the season goes on.

Hamlin talked about the upcoming match up with Danville. “Coach McKinney does a great job year in and year out with his team,” he said. “Deshaud St. Martin is a great post player and gave us some trouble this summer so it should be a good test for us.”

The Titans will be back on the court Thursday, Nov. 30, when they travel to take on the Danville Admirals. Tip off is set for 7:30 p.m. 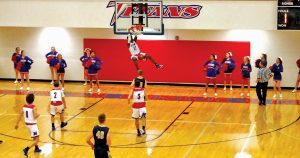 Senior Trevon Faulkner slams in two of his 14 points during the Titans’ 65-45 win over Shelby County on Tuesday, Nov. 28.