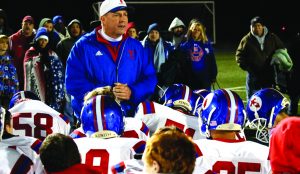 Mercer Head Coach David Buchanan addressed his team after a heartbreaking loss to Collins in the Class 4A state quarterfinals. (Photo by Arpan Dixit)

The Mercer County Titans (7-5) are coming off two momentum-building playoff wins against Franklin County and  East Jessamine, but their season came to a close on Friday, Nov. 17, against the Martha Layne Collins Titans(10-2)  by a final score of 34-28.

The Titans had a chance to tie the game, driving the ball down the field and into Collins’ territory, but the drive was ended by an interception thrown by senior quarterback Gunnar Gillis. It was a heartbreaking scene as the Titans hung their heads back to the sidelines and watched Collins take a knee and advance to the Class 4A state semifinals.

Other than the interception, Gillis had a great game and kept his team in the game all night long. He was 14/26, for 261 yards and two touchdowns through the air and one on the ground.

It took a comeback for Mercer to make the game a nail biter  in the end and Head Coach David Buchanan talked about his seniors and their impact after the game.

“They (seniors) led us in the transition through different coaches. They also dug us out of some very tough spots the last three years,” he said. “These guys made a large and positive impact on Titan football.”

It was a heartbreaking finish for Mercer, but Buchanan couldn’t be more proud of his group.

“The only thing bigger than my disappointment in the end of our season was how proud I was of them,” he said. “Their improvement this past month, in November has been tremendous. They never quit and played extremely hard. Each day that passed, the loss will get smaller, but their appreciation and realization of what they did will get bigger.”

Johnson led Mercer in receiving with 900 yards on 35 receptions, scoring 11 times. Faulkner was first on the team in catches with 36, with 733 receiving yards and 11 touchdowns. Lewis was also a force through the air, hauling in 29 catches for 641 yards and six touchdowns.

On defense, Faulkner led Mercer in interceptions with eight and fumble recoveries with five. Drakeford was second on the team with three interceptions. Johnson and Lewis had two each.

Faulkner was also second on the team in tackles with 136 total, trailing junior linebacker Jamason Sherrow, who had 164.  Those two were the anchor for Mercer’s defense and made timely plays all season. Listed below are statistics against Collins.