The contractor, Delong Concrete of Lexington, was unable to start work on Monday as scheduled because of equipment issues, said  Natasha Lacy, information officer of the Kentucky Transportation Cabinet, Department of Highways.

Lacy said Delong workers will prep the deck before pouring concrete after the Thanksgiving holiday.

One lane on the bridge has been closed since August. When the contractors stripped away the paving, they discovered unexpected deterioration in the metal deck and pulled out until the state changed the bridge repair contract.

Motorists are advised to use U.S. 127 and Kentucky Route 33 as a detour.

All work is subject to change depending on weather, emergencies and other factors beyond the state’s control. 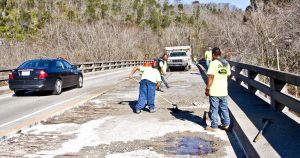 On Tuesday, contractors returned to work on the Brooklyn Bridge, which has been reduced to one lane since August.