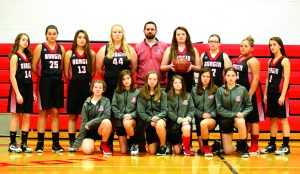 The Burgin Lady Bulldogs, who were 2-23 last season, will be lead by two seniors, Summer Mullins and Miranda Hungate.

Head Coach Chad Terrell, who is in his fourth season, talked about replacing a player of Naylor’s caliber.

“We’re going to have to look to Miranda and Summer to make up for that loss in scoring left by Alex,” he said. “It’s hard to replace a player who is a guard and can handle the ball.”

The Lady Bulldogs, just like the boys team, are very young despite having two seniors on the roster.

While losing Naylor is tough, Hungate is more than capable of handling the scoring. She was second on the team in points and rebounds last season.

Mullins led the Lady Bulldogs in rebounding with 8 per game, and was third on the team in scoring with 6 points per game.

Terrell said he expects Hungate and Mullins to lead by example on and off the court because a lot of their teammates that will be on the court with them this season will be middle schoolers and underclassmen.

“We’ve talked with them about having a positive attitude each and every night out on the court,” said Terrell. “Their teammates are very young so leading a middle schooler is a little different than leading a high schooler. We’ve asked them to be patient and honest with their teammates this season.”

Like the boys team, the Lady Bulldogs will also be travelling a lot this season, 16 out of their 27 games are on the road.

Burgin will be travelling to Frederick Fraize (Cloverport), Model (Richmond) and will be playing in the Louisville Collegiate Classic mid-December.

“I think travelling really brings a team together like building that camaraderie on the bus,” said Terrell. “We’re going to really bring the team together this year. You get in a battle on the road, you don’t really have anyone to rally around but each other.”

Terrell has implemented the F. A. T. E system for his players: Focus, Attitude, Teamwork and Effort. He knows if his players work on those characteristics, they will become better basketball players on and off the court.