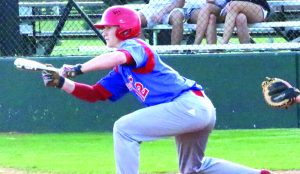 Joseph Stoeckinger, above, committed to play baseball at Frontier Community College in Illinois. Stoeckinger is continuing the family baseball legacy by playing at the next level. (Photo by Arpan Dixit)

The Stoeckinger name might sound familiar when it comes to Mercer athletics. Joseph, who is a senior on the Mercer County baseball team, decided over the weekend he wanted to continue his education and athletic career at Frontier Community College located in Fairfield, Ill.

Frontier CC is in the same conference as Lincoln Trail College. That is the same school where former Titan baseball players Tanner Robins and Lane Peavler play, so Stoeckinger will see some familiar opponents during his college career.

Joseph’s brother, Jackson, was recently selected in the 12th round of the MLB draft by the Washington Nationals and is now working his way up through their farm system. Jackson was the first ever Mercer County Titans drafted and his little brother certainly wants to be added to that list.

“My brother did have a huge impact on my decision to play junior college baseball,” said Joseph. “It worked out very well for him and he got a lot of chances to develop while playing at the junior college level.”

Stoeckinger said the recruiting process started picking up for him this past summer, when he was playing travel baseball for the Bluegrass Xpress.

Southeastern Illinois College, Olney Central and Lincoln Trail were some of the other schools interested in him, but chose the Bobcats instead.

“Everything impressed me about Frontier. Their facilities as well as the athletic dorms were very impressive,” said Stoeckinger. “Along with that, the coaches have very impressive track records. Head Coach Brandon Benton has had at least seven players transfer to division I schools each year in his years of coaching so I wanted to play for a coach who can help me get where I want to go and I believe he can.”

Stoeckinger eventually wants to transition to a division I school after a couple years and said if it were upto him, he’d be a Kentucky Wildcat.

“I don’t know anybody who wouldn’t want to play there,” he said.