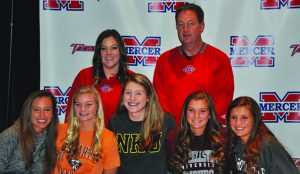 Head Coach Chris Souder (back right) and assistant Hayley Spivey (back left) with the seniors. (Photo by Dalton Christopher)

Being a state champion in a sport comes with a lot of perks. One of those perks is being able to play in front of college coaches in hopes of getting a full athletic scholarship to play their respective sports. For the five seniors of the defending state champion Mercer County Lady Titans basketball team, their dreams have been turned into reality.

Seygan Robins, who signed with the University of Louisville, is the defending girl’s sweet sixteen MVP and was the floor general for the Titans. Robins was accompanied by her parents, Brandon and Marta Robins. She averaged 17 points per game last season. Robins thanked her teammates, her community, and the coaches she has learned from. “I just want to thank all of the coaches who have sacrificed their time and energy to help me as a player,” said Robins.

Emmy Souder, who signed with Northern Kentucky University, brings her unique skill set to the Lady Norse. Souder, unlike a traditional center, has a strong perimeter game and can stretch the floor for the Lady Titans, creating match up problems. She averaged 11 points per game last year. Souder was accompanied by her parents, Greg and Debbie Souder, and her brothers, Landon and Nick.  Souder thanked her coaches and teammates for helping her become the player she is, specifically Coach Souder. “He has prepared me to whatever Coach Whitaker throws at me,” Souder said.

Emma Davis, who recently signed with the University of Tennessee-Martin, brings her hustle and shooting ability to the Lady Skyhawks. Davis plays her best on the sport’s biggest stage as she made her presence known at the state tournament last year. Davis scored 15 big points in the semifinal against Murray to help the Lady Titans advance to the state championships game. She averaged 9 points per game last year. Davis was accompanied by her parents, Dennis and Tara Davis. “I just want to thank my community, my parents, my grandparents, and my extended family,” she said.

Faith and Lexy Lake, who also recently made their college choice to further their athletic career at Campbellsville University, bring their ball-handling and shooting ability to the Lady Tigers next season. Faith, is known for her tenacious rebounding and long frame that disrupts opponents, while Lexy is known for her sharp shooting ability. Faith averaged 8 points per game, while Lexy averaged 11 last year. The twins were accompanied by their parents, Nikki and Ryan Lake, and their brother, Rylan. Faith and Lexy both thanked their community, teammates  and family for supporting them.

Head Coach Chris Souder has coached these girls for a very long time, ever since they were little, so he knows what they will bring to their future programs. Souder talked about how special it was that the girls signed together.

“What we are seeing here is a generational thing, maybe even multi-generational,” said Souder. “I think this bunch right here could go down as one of the greatest girls basketball teams in the history of the high school athletic association.”